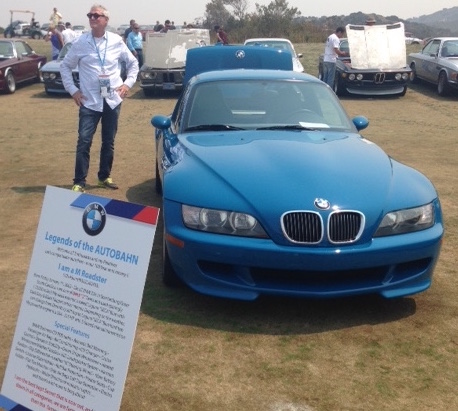 Mr Z3 is extremely proud to have attended BMW's 100th year anniversary. In support of this iconic celebration, we participated in the Legends of the Autobaun Concourse d'Elegance event.  In our first attempt, won a trophy with our beautiful our 2002 Laguna Seca Blue M Roadster.  As we encourage, for the collector or enthusiast, always buy the finest example available.

A Clownshoe Crashcourse .... (article from Jalopnik.com)

I came across this story about the once unrealized "future" value of the E30 M3 and then goes on to compare the Z3/M Coupe and bolsters my opinion of the future value of the Z3/ M Coupe. In short, now is the time to buy. You can read the whole article HERE at Jalopnik.com

The Roadster may never be cheaper

If you have considered purchasing a Z3, then you need to read this article from the January 2015 issue of Sport & Exotic Car. The roadsters are never going to be any cheaper as the values will continually rise.

As its name implies, the Z3 M Roadster was designed as a track-ready variant of the standard Z3 convertible. It was introduced to partially fill the void that was left in the BMW lineup when the E30 M3 convertible was given the axe in the early 1990s.

The M Roadster was powered by the same 3.2-liter straight-six engine that was found under the hood of the E36 M3. Early European-spec cars got a 321-horsepower version of the six but North American-spec models had to get by with a market-specific mill that only produced 240 ponies. Later models built in 2001 and 2002 were upgraded with a 315-horsepower 3.2-liter borrowed from the E46 M3.

The Z3 has retained its value wonderfully and more importantly it has retained its wonderful quality. Why? Because it was engineered by BMW to be a total automobile/coupe or roadster. All Z3s produced had standard & safety equipment that would rival any car of 2014 plus comfort, durability, attention to detail, design and total sophistication on each and every model. This refers to all Z3 models and the most important aspect is that they can all be serviced by the country’s largest dealership network of BMW worldwide.

Normally roadsters were only very good in one area when this car was engineered it was extraordinary in all areas of quality performance and just a plain blast to drive. All Z3s were made in the USA at the extraordinary plant in Greer/Spartanburg South Carolina. At the time of production the M-Roadster was the fastest BMW ever produced even today 2014 you can use the rearview mirror against many vehicles. Many Roadsters & Coupes and  other than M’s were made with the terrific five speed or four-speed automatic transmission which has the ability to have the operator shift on your own or let the equipment do it for you which is more popular today due the overcrowded roadways. The gas mileage ranges from 18 to 27 miles a gallon even more impressive with the high cost of fuels presently, MR Z3  has driven & owned every model made and when he keeps his foot light he has average more than 30 miles a gallon on trips on the highway.

2-Even the Slowest one Is Seriously QUICK

6-Selection of good low mileage automobiles available today maybe not tomorrow- Buy from a Specialist and you will save in the long term. Z 3’s are engineered and built to last a lifetime –Quality service and parts available don’t skimp on maintenance-------